Fountain Pens: A Peep in History

“But Ma’am, what are fountain pens? I have never used one. We don’t have written assignments in the school.” These are not a dialogue from a sci-fi movie script, but a statement of 14 yrs old Shraddha ( name changed), one of the young participants in my workshops.

As I have brought out in my previous blog posts, the pen has seen a transformation, akin to the human race itself, for generations. The caveman who scribbled on walls using stones would never have imagined a writing instrument that effortlessly can create magic on a surface called paper without causing anyone wounds on the hand. Well, for the expressions can cause heartache sometimes!! Pun intended

The ink, the writing tip, and the ink filling system saw the major changes when we see through the pen’s transformation.

The Need for a Fountain Pen

A simple few web searches on this topic brings out the need for a fountain pen dates back to 953 CE. Qadi al Nu’man al Tamimi in his book Kitab al Majalis wa ‘l-musayarat stated that the then Caliph in Arab Egypt , Al-Mu’izz li-Din Allah demanded for a pen that doesn’t stain his hands or clothes, and was provided with a pen that held ink in a reservoir. Certain researches of the Renaissance era brings out the probable use of a working fountain pen constructed and used by artist and inventor Leonardo da Vinci. 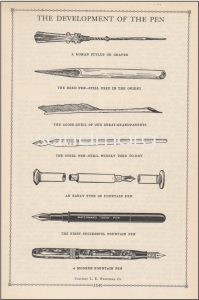 Depiction of Development of Pen by Waterman Co.

L Patenting of fountain pens began in the early 1800s. It’s believed that the first fountain pen was patented by the Romanian inventor Petrache Poenaru on 25 May 1827. His invention had a barrel made with a swan quill. 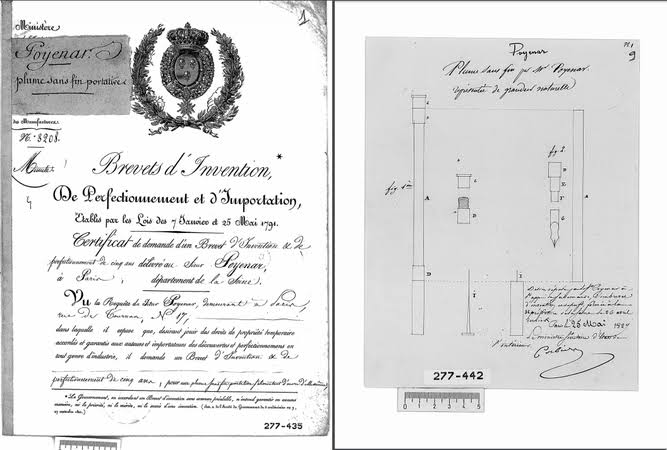 Image of Patent of Petrache Poenaru available on internet

Few more notable patents are shown in the image below:-

In 1883, Lewis Waterman founded the Waterman Pen Company. He received his patent in 1884 and was the market leader in fountain pens until 1920. Other market giants established at that time were The Parker Pen Company, in 1888, by George Safford Parker, and Wirt, based in Bloomsburg, Pennsylvania.

Germany and France were not behind in this race. Mont Blanc was founded in 1906, and the sales representative of the Parker Pen, Josef Lamy, founded his own company in 1930, LAMY.

Our home turf didn’t see the shine of a homemade nib until 1932, when Ratnam Pen works officially created the first swadeshi version of the fountain pen and handed them over to Mahatma Gandhi in 1935.

The Glamour of the Nib 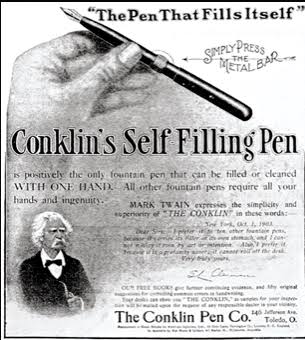 Almost all fountain pen brands have received their share of glamour for their craftsmanship. The mind behind Sherlock Holmes, Arthur Conan Doyle, and Graham Green wrote with a Parker Duofold. The Queen of Britain uses a Parker 51. Anne Frank wrote her diary with a Mont Blanc. Walt Disney was himself seen in pictures with Sheaffers.